TATTOO REMOVAL
IS ALL ABOUT POWER

Photo Biotech Q100, Q-Switch, Probe hand-piece is constructed as a power containment device and acutely controlled power emitter. Therefore, minimal power is required is to produce the adequate and necessary 1.6 joule pulse output. Hence a smaller base unit is required for power generation.

This laser system is benefited by multiple unique designs including: the special Q-switch component and optimized polarizer cavity and a very light and small handheld probe laser distribution technology. This ensures a stable and uniformly distributed laser beam that emits PURE 1064nm or 532nm laser beam, so as to achieve the best treatment result.

Tattoo removal is most commonly performed using lasers that break down the ink particles in the tattoo. The broken-down ink is then absorbed by the body, mimicking the natural fading that time or sun exposure would create. All tattoo pigments have specific light absorption spectra. Photo Biotech Q-100 capable of emitting adequate energy within the given absorption spectrum of the pigment to provide an effective treatment.

Tattoos
Including Permanent Make up 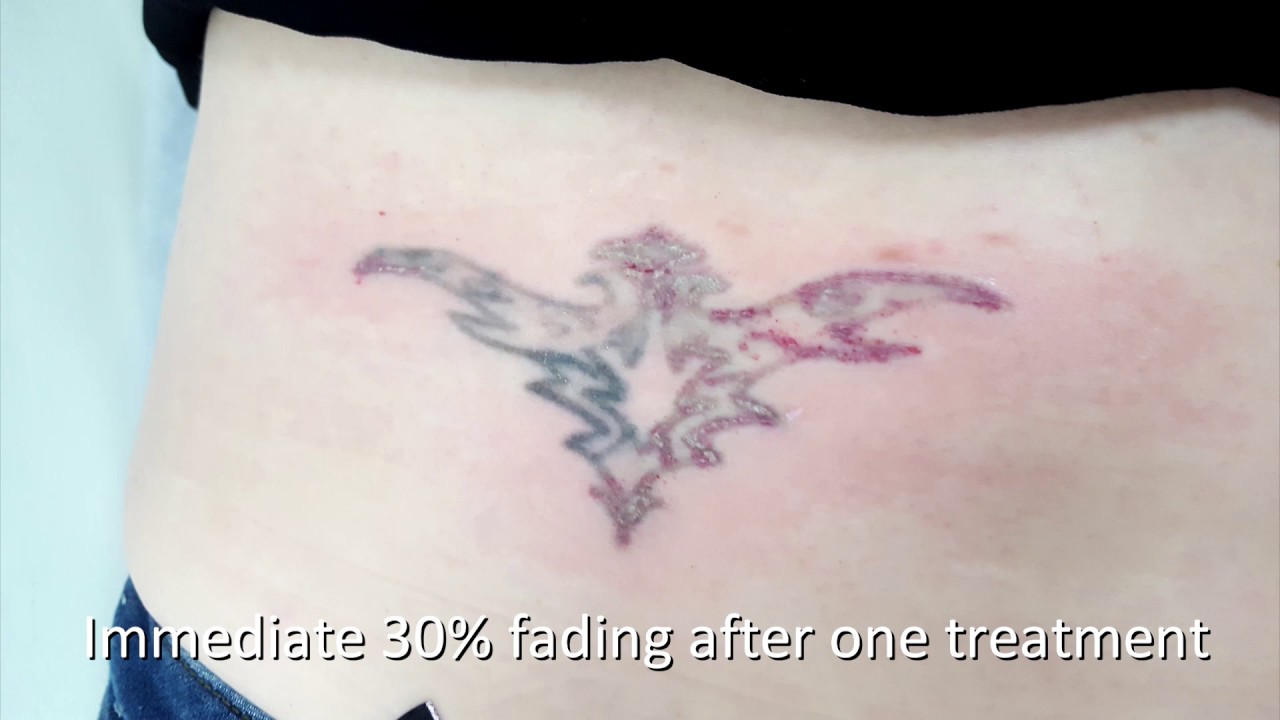 The energy density (fluence), expressed as joules/cm2, is determined prior to each treatment as well as the spot size and repetition rate (hertz).

The energy density (fluence), expressed as joules/cm2, is determined prior to each treatment as well as the spot size and repetition rate (hertz).

Laser tattoo removal is a successful application of the theory of selective photothermolysis (SPTL). However, unlike treatments for blood vessels or hair the mechanism required to shatter tattoo particles uses the photomechanical effect.

In this situation the energy is absorbed by the ink particles in a very short time, typically nanoseconds. The surface temperature of the ink particles can rise to thousands of degrees but this energy profile rapidly collapses into a shock wave.

This shock wave then propagates throughout the local tissue (the dermis) causing brittle structures to fragment. Hence tissues are largely unaffected since they simply vibrate as the shock wave passes.

Q-switched Frequency-doubled Nd:Yag: 532 nm. This laser creates a green light which is highly  absorbed by red and orange targets. Useful primarily for red and orange tattoo pigments, this  wavelength is also highly absorbed by melanin (the chemical which gives skin color or tan) which  makes the laser wavelength effective for age spot or sun spot removal.

Q-switched Nd:YAG: 1064 nm. This laser creates a near-infrared light (invisible to humans) which is  poorly absorbed by melanin, making this the only laser suitable for darker skin. This laser  wavelength is also absorbed by all dark tattoo pigments and is the safest wavelength to use on the tissue due to the low melanin absorption and low hemoglobin absorption. This is the wavelength of  choice for tattoo removal in darker skin types and for black ink.

When you purchase Q100, you will receive a full marketing kit that includes:

yttrium-aluminum-garnet (Nd:YAG) laser 1064 nm emits light that penetrates 2−3 mm into dermis and hence is suitable for deeper dermal pigmentation such as found in nevus of Ota.

By passing the beam through the potassium-titanyl-phosphate (KTP) crystal, the frequency is doubled and the wavelength is halved (532 nm).

A shorter wavelength penetrates less deeply and therefore is more useful for removal of epidermal pigment and lesions.

Preset software includes: Pulse width or pulse duration are critical laser parameters.  Q100 switched lasers has the  appropriate pulse durations for tattoo removal. The  shorter pulses are a safer and more efficient removal method because the peak power of the pulse is greater. Spot size, or the width of the laser beam, affects treatment. Fluence or energy density is another important consideration. Fluence is measured in joules per square centimeter (J/cm). It is important to be treated at high enough settings to fragment tattoo particles. All Photo Biotech technology comes with advance yet simplified easy to use functions; minimizing the need to memorize every possible energy parameter.

See What Our Customers Say About Us

If you are looking for some awesome, knowledgeable people to work with, these are the guys I highly recommend. Their friendliness and result-driven approach is what I love about them.

I have been using the Smart IPL and Diode laser the most. My customers achieve really good results and I feel confident in the treatments I offer. The diode hair removal is the BEST! I really don't have a lot of hair to remove on myself but the result I see on my customers are amazing they are amazed and so and I. I have used the Q-Switch a couple of times on the same customer and she is getting results too - the tattoo is disappearing and should be gone in the next visit.

Good Machine! Expensive But one of the best out there. Its safe and effective. Working on buying a second one in the future (maybe I can get a discount on my second!) agree with previous review its a heavy machine - but in a good way!

The science of laser tattoo removal

The undersigned principal(s) certify that he/she has full authority to act on behalf of the applicant. The applicant (if a sole proprietor), principals, and guarantors each certifythat all of the information contained in this application and on each document required to be submitted in connection herewith are true and complete. The applicant (if a sole proprietor) and each guarantor hereby authorize photobiotech and its Assigns to obtain his/her credit profile from the national credit bureau(s) for the purpose of considering this credit application and any subsequent update, renewal, collection or additional credit. A photocopy or facsimile of this authorization shall be as valid as the original. Further, the applicant and guarantors hereby authorize each bank and finance reference listed in this credit application to release information about the applicants and guarantors to photobiotech and its Assigns, as requested by photobiotech. If your application for business credit is denied you have the right to a written statement of the specific reasons for the denial by writing to photobiotech, within sixty (60) days from the date you are notified of our decision. photobiotech will send you a written statement of the reasons for the denial within thirty (30) days of receiving your request for the statement.

The Federal Equal Credit Opportunity Act prohibits creditors from discriminating against credit applicants on the basis of race, color, religion, national origin, sex, marital status, or age (provided the applicant has the capacity to enter into a binding contract); or because all or part of the applicant’s income derives from any public assistance program; or because the applicant has in good faith exercised any right under the Consumer Credit Protection Act. By signing below, I also wish to continue to receive updates from photobiotech regarding our account. Information should be sent to the fax and/or e-mail address provided for this account.